Age Shall Not Weary Them….

Posted on November 6, 2013 by Prevaricat

Stepping away briefly from my recent 16th and 17th century genealogical musings about RIDOUTS, and in acknowledgement of the rapid approach of Remembrance Day, I wanted to write about three distant cousins of mine. These young men, whose total age added up to a mere sixty-six years, died during WWI; one in the UK, one in France and the other in Belgium. They were all beloved sons but none were old enough to have been married or to have had children of their own. Such is the sadness of war. As an ex-soldier myself, I salute them.

William was born on the 31st December 1895 in London and grew up in Shoreditch; by 1911, his parents, William Henry and Clara ran a coffee shop at 37 Museum Street (now Bibimbab Café) in Bloomsbury, close to the British Museum. One of six children, William was the only boy.

On the 13th August 1914, at St Paul’s Churchyard, William enlisted for military service. He was nineteen years and eight months old and described as being five feet ten inches tall, weighing ten stone, with a fair complexion, blue eyes and light brown hair; he had been working as a cook, possibly for his parents. 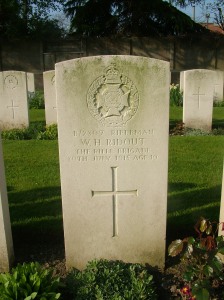 After 262 days service in the UK, Rfn. B2307 Ridout, now with the 8th Btn Rifle Brigade, was shipped overseas as part of the British Expeditionary Force (BEF) landing in Belgium on Thursday 20th May 1915. From war diaries and the knowledge that William died on Wednesday 30th July, I think that he was probably one of the many victims of the first flamethrower used by the German army at Hooge, in Flanders. A ‘Flammenwerfer’ was a cylinder strapped to a soldier’s back, attached to which was a lit nozzle which produced a jet of flame reaching up to 25 yards and billowing thick black smoke; the surprise attack came at 0315h and within two days of fierce fighting, 782 British men had been killed. From the 4th August 1915 to the 21st January 1916, William was officially listed as missing in action, which must have been agonising for his family, before his death was finally confirmed.

William is buried in Ypres (now Ipres) Reservoir Cemetery. By 1921, William’s father had taken receipt of all three of their son’s medals, customarily associated with the BEF: 1914-15 Star, British War Medal and Victory Medal, often affectionately known as Pip, Squeak and Wilfred.

Victor was born on the 8th May 1894 in Bath, one of the twelve children of Edwin and Ellen Ridout. Edwin was a French polisher, like his father (my great grandfather) and the family lived in Walcot, according to the 1911 census. Said to be nineteen, but actually eighteen in 1911, Victor was working as a footman in the household of a wealthy widow called Mary FRIEND, who lived in Thanet, Kent. In December 1915, whilst working as a driver for a garage in Bath, he accidentally knocked over and killed an old gentleman; the inquest was reported in the local newspaper. The coroner supposed that if cars were “allowed to career through the roads (at 10mph)” then more people would be killed – he recommended a speed limit of 5mph be imposed!

Pte. M2191883 RIDOUT joined the Army Service Corps, at some point after December 1915, and saw action abroad. Unfortunately, his service record has not survived but his date of death was reported, probably by his mother, in the local Bath Chronicle: “Officially reported died of wounds on May 18th (1917) in France, Victor Wilfred Ridout, the dearly beloved fifth son of the late Mr Edwin Ridout and Mrs E Ridout, 18 Camden Cottages, Hedgemead, Walcot.” 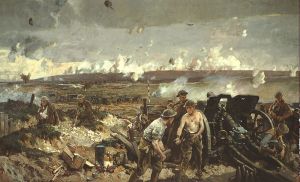 The Commonwealth War Graves Commission records that Victor served in the 611 Mechanical Transport Company, attached to the 182nd Siege Battery, Royal Garrison Artillery. This formed part of the 18th Heavy Artillery Group, supporting the Canadian Corps, who fought at the Battle of Vimy Ridge from the 9th to the 12th April 1917. Undoubtedly, Victor was wounded during that engagement and died a month later, aged twenty-three. He is buried at Aubigny Common (Extension) at Aubigny-en-Artois, Pas de Calais, Northern France.

Oliver was born on the 8th April 1892 and was Victor Wilfred’s older brother. In 1911, nineteen year old Oliver was also a footman, working in the Bournemouth home of Mr Alan Walter LENNOX-BOYD, an eminent barrister. It was a real ‘Upstairs, Downstairs’ situation as Oliver was one of twelve servants: three lady’s maids, three housemaids, a parlour maid, nursery maid, nurse, kitchen maid, cook and coachman. ‘Upstairs’, the family comprised two adults, three children and five assorted members of the well known SITWELL family. 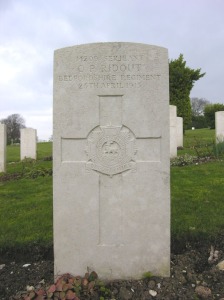 Oliver Percy died on Sunday 25th April 1915; his death was registered in Steyning, Sussex. He was a sergeant in the 8th Battalion Bedfordshire Regiment and his service number was 14209. Oliver was buried in Brighton Cemetery, Bear Road, Brighton, Sussex; Oliver was one of 275 casualties of WWI buried at this cemetery.

Information on the 8th Btn shows that it was formed at Bedford in October 1914, as part of Lord Kitchener’s 3rd ‘call to arms’. Enlisted men from all over the UK mustered at their local train stations and were transported en-masse to the Regimental HQ at Bedford. Other than a brief spell in Brighton, most of their training was undertaken in Surrey until the ‘Hungry 8th’, as they were nicknamed, were mobilised, arriving at Boulogne in France early on the 30th August 1915. Obviously, Oliver had died whilst in Brighton but, during his service, had been promoted three times, to the rank of sergeant and may have been training new recruits.

This entry was posted in Individual and tagged RIDOUT, WWI. Bookmark the permalink.

5 Responses to Age Shall Not Weary Them….