Christopher Ridout, baptised on the 12th September 1669 in Sherborne Abbey, was one of eight children of husbandman (farmer) John and Elizabeth Ridout (neé Oliver). John had married Elizabeth in ~1655.

In 1678, John made his will, the contents of which give some idea of his connection with the land. The following excerpts suggest that John’s oldest son was William who, if legitimate, was no more than nineteen years old. The will also names other children:

“Item I give and bequeath unto my said son William Ridout one tenement with the appurtenances called Dollins and all my right estate title and interests of in, out, of and to the same he the said William paying yearly out of the same unto John, Richard, Christopher, Robert, Margaret and Frances, my sons and daughters, during the said term the yearly sum of twenty shillings apiece until they attain their several ages of one and twenty years and to be paid at two of the most usual feasts or terms of the year (that is to say) at Lady Day and Michaelmas by equal portions…”

There are some possible baptism records for some of those children, excepting William  and Julian…

“All the rest and residue my goods chattels lands and tenements not herein before given and bequeathed I give and bequeath to William and Robert who I make my executors of this my last will. And I do make my loving brother William Ridout and my brother in law Christopher Oliver executors in trust of this my will during the minority of my said sons William and Robert. And my will further is that it shall and may be lawful to and for my said executors in trust to retain and keep in their hands and custody so much money as they or either of them shall really and bone fide expend lay out or be put unto for or by reason of the said trust in witness where of I have here unto put my hand and seal the day and year first above written.” 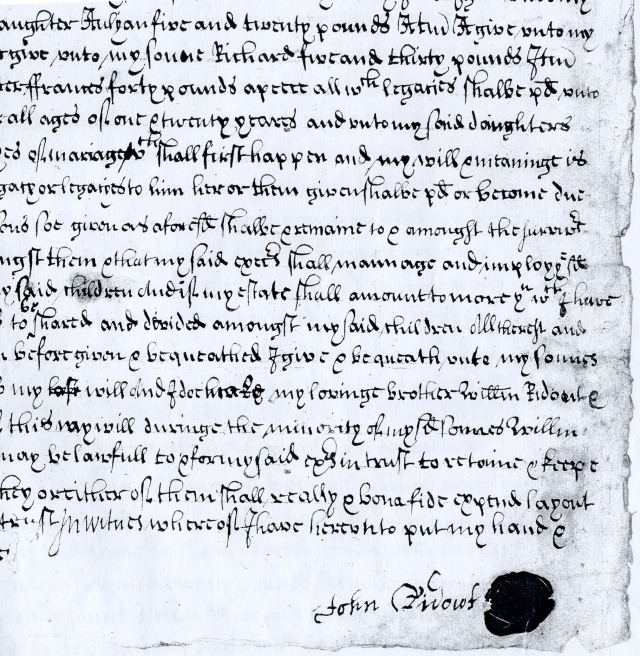 The signature of John Ridout on his will of 1678

Interestingly, there is a marriage recorded in Sherborne of a Christopher Oliver to Edith Ridout on the 24th October 1654. So, it’s possible, although unproven, that Edith was John’s sister who, perhaps, was similar in age to him. Also, in Christopher Oliver’s own will of 1688, an inventory of his possessions was prepared by, amongst others, a William Ridout who may well have been the same ‘loving brother’ that John Ridout had mentioned.

Returning to Christopher’s story…. When he was eight, Christopher’s mother Elizabeth died, and her death was followed a year later by that of his father John. Quite what happened to the young children we will never know but the next we hear of him, Christopher is twenty-five years old and marrying Mary Parsons in Sherborne Abbey (24th June 1694). The Sherborne Ridout family had such a strong connection with this building which, although a magnificent pile, was to them simply their parish church. It was here that sadly, less than a year after their marriage, Christopher’s wife was buried (24th May 1695) and Christopher married again to Mary Glover (21stNovember 1697).

Christopher appeared briefly in a manorial record dated 1695. The court leet, or view of frankpledge, was a court granted to a hundred, lordship, manor, or borough by the Kings Charter. It was a form of self policing amongst the community such that about ten or so (male) householders would form a tithing which was held jointly responsible if one of its members committed an offence. Such matters would be brought before the hundred court and fines or imprisonment would be imposed, or perhaps the offender would be placed in the stocks. One of the court’s concerns was ‘to guard against all manner of encroachments upon the public rights, whether by unlawful enclosure or otherwise, to preserve landmarks, to keep watch and ward in the town, and overlook the common lands, adjust the rights over them, and restraining in any case their excessive exercise, as in the pasturage of cattle’. This court roll features both Christopher and William of Hile:

Court Leet held at Sherborne 13th April 1696. We present William Ridout of Hile to amend his pitching at the ende of his orchard in Bow Lane by 24th May. Sub poena 5d ‘done’

Quite what the offence was is not clear – perhaps ‘pitching’ meant laying down a path but whatever it was, clearly a boundary was crossed and so William was fined five pence. Christopher appears to have represented the residents of Westbury, an area of Sherborne in which he lived. Note all the other Ridout men on this jury – possibly all related, but the name was very common in Dorset, which certainly makes life complicated for a Ridout family historian!

Throughout his life, Christopher and his family appeared several times in the Sherborne manor records, mainly through taking on leasehold or copyhold tenancies. The lord of the manor (in Sherborne this was Lord Digby, Baron of Goatshill) owned the land and the buildings thereon but would sell leases to tenants based on the term of lives. That is to say, a man might take out a lease on three lives – his own, his wife’s and his son’s – and when all three had eventually died, the property would revert back to the Lord. In the 17th century, three lives might be considered the equivalent of our more modern 99 year lease. But, with the Lord’s permission, and on payment of a ‘fine’, lives were often exchanged throughout the lifetime of the property. This system enabled a family to keep their tenancies on a fairly long term basis and, as they gradually moved up in the world, take on more property. In this way a man could eventually farm a good deal of land, progressing from a humble husbandman to a yeoman, maybe purchasing his own copyhold land.

Every now and again, the Lord of the Manor would survey his lands and the resulting document shows the names of the tenants, their properties, rents and herriots (gifts to the Lord). Christopher appeared four times in the Sherborne Manor Survey of 1709 showing that he held two tenancies in Eastbury, one in Primsley Manor and one in Gilland – all areas of Sherborne. The Primsley Manor property is particularly interesting as this was in the vicinity of Hyle Farm in Westbury (where William Ridout farmed) and close to the River Yeo. This last observation may be significant as it transpires that at some point in his life, Christopher became a miller and the West Mill was within Primsley (see map).

*Before 1752, England used the Julian calendar which, oddly to us, started the year on March 25th (Lady Day). This meant that January 1st to March 24th were part of the preceding year. Since not everyone followed the convention even at the time, this became confusing and the double date was often used. To us, 7thJanuary 1670/1 would mean January in the year of 1671.